Amazon.com MP3 has limited time deals, rather than starting a thread everytime one occurs, I figured I would start a thread that I can update when deals of interest occur.

Today through Monday (Friday 10/3/08 through 10/6/08)
The Friday Five includes the new Willie Nelson and Wynton Marsalis CD priced at $5. I actually own it, there are some danceable tracks on it. It is also discussed in Jesse Miner's podcast this week.

PS - The other Fridays 5 CDs are Saturday Night Fever Soundtrack, the new My Morning Jacket, and old Minutemen and Motorhead albums.
Last edited by Nate Dogg on Sat Nov 15, 2008 8:17 am, edited 1 time in total.
Top

Nate Dogg wrote: Today through Monday (Friday 10/3/08 through 10/6/08)
The Friday Five includes the new Willie Nelson and Wynton Marsalis CD priced at $5. I actually own it, there are some danceable tracks on it. It is also discussed in Jesse Miner's podcast this week.

I stumbled across that album a while back. The band Marsalis put together sounds absolutely fantastic, then the track is ruined the second Nelson opens his mouth. Tis a shame really.

Also, I really like the Amazon MP3 store. It's an easy shopping experience, and they sell high quality 256 MP3s with NO DRM, unlike iTunes' crappy 128 ACCs with ultra restrictive DRM.
Reuben Brown
Southern California
Top 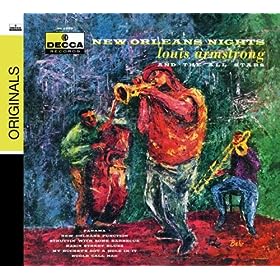 Nate:
These are great deals. I too purchase a lot of stuff on Amazon both new and used. How do you find these deals? Thanks for sharing.
Ken.
Top

This was confusing to me. This guy explained it :

"Verve's 2008 reissue of New Orleans Nights, a Louis Armstrong album originally released on Decca in 1957, is a compilation of recordings made in 1950 and 1954 by two different bands operating under the noble mantle of Louis Armstrong and the All Stars.

"Panama," "New Orleans Function," "My Bucket's Got a Hole in It," and "Bugle Call Rag" testify to the integrity of the earlier group, with Armstrong leading Jack Teagarden, Barney Bigard, Earl Hines, Arvell Shaw, and Cozy Cole, who is granted extra long drum breaks during the "Bugle Call Rag." On "Struttin' with Some Barbecue" and "Basin Street Blues," Tea is replaced by Trummy Young, Hines by Billy Kyle, and Cole by Kenny John. Tenor saxophonist Bud Freeman sat in on "Basin Street"; it's a pity that he didn't participate on "Barbecue," as the warmth and ease that characterizes this elegant update of Lil Hardin Armstrong's magnum opus would have fit Freeman's personality like a favorite pair of argyles. ~ arwulf arwulf, All Music Guide"
Top

What a great deal for one of my favorite Christmas albums! I recently bought a copy of this remastered edition (for the bonus tracks) on CD for a lot more than $1.99. Doh!

The Essence of Swing by Various Artists £4.37

Special Daily Deal today, Wednesday, March 25th, the Austin own Seth Walker. For over ten years, he has been a very popular local live act among within your dance scene.