Thought I'd mention this, since it's such a classic for Swing DJs, and has been out of print for quite some time.

My Memories of You [ORIGINAL RECORDING REMASTERED] by Maxine Sullivan

I just saw it on Amazon.. Didn't know it had been re-released. I have the out-of-print Dcc Compact Classics version (bought on eBay), but was wondering about the sound quality of this new remastering.

Does anyone know if Empire Musicwerks has a good reputation for remastering?

This is also on the iTunes Music Store. It's a great album and the remastering is very good. I definitely recommend it.

[edit]At least, I'm pretty sure it's the same album...it goes by a slightly different name: Jazz All Stars & Maxine Sullivan - Memories of You: A Tribute to Andy Razaf[/edit]
Top

cool. i can buy the two extra tracks from itunes, then.

i compared the snippets on itunes with the first cd i have. over decent headphones from a crappy sound card the aac track from the itunes store sounds a little better than the cd. the difference isn't huge, and i had to listen five times to make up my mind about which i liked better. so: remastering is good, but the old cd sounded fine, so whatever.
Top

I just found this on a recent outing to Amoeba, and then saw that I had missed the "announcement" on this forum. Two new songs, one of which is danceable (Loch Lomand) despite a bit of a two-beat feel.

The best news is that it is no longer out of print! I have had my copy for a while, now, but it is good to see it distributed more so that it can be over-played once again! 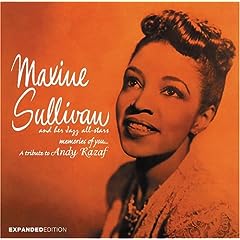